The Bath Homelessness Conference, organised by Wera Hobhouse MP and Roanne Wootten from Julian House, on the 9th November has announced its speakers.

Roanne Wootten said: “I’m very pleased to be able to announce Rick Henderson from Homeless Link and Lucy Bowyer from the Albert Kennedy Trust will be our two keynote speakers.

Homeless Link is the national charity for organisations working directly with the homeless in England, and Rick has been the CEO since 2012. He’s also a member of the National Rough Sleeping Advisory Panel, and the European homelessness network.

The Albert Kennedy Trust is a voluntary organisation created in 1989 to serve lesbian, gay, bisexual and transgender young people who are homeless, living in a hostile environment or in housing crisis. Based in Manchester, Newcastle and London, it works with partners across the country. Lucy is the Director of Services for the last 7 years.”

Wera Hobhouse said: “Against this national picture, I think we have a good story to tell here in Bath, with our multi-agency approach, and I am very pleased that some of the key players will be addressing the conference. There will be exhibition space so that every organisation involved locally can be represented, and participants can interact with them.

Roanne will be hosting this second session, as Operations Director for Julian House, and she will be joined by DHI’s Housing Director, David Walton, and Off the Record’s Operations Manager, Siobiann Chaplain.

I’m also, very hopeful that we will hear from two people who’ve been through the system and will give us their side of the story, what it’s like to be homeless in Bath and how our different agencies can help.”

The final panel session is being chaired by Gavin Thompson, Editor of the Bath Chronicle and Bath Live.

The conference is being held at the Bath Royal Literary and Scientific Institute on the 9th November. 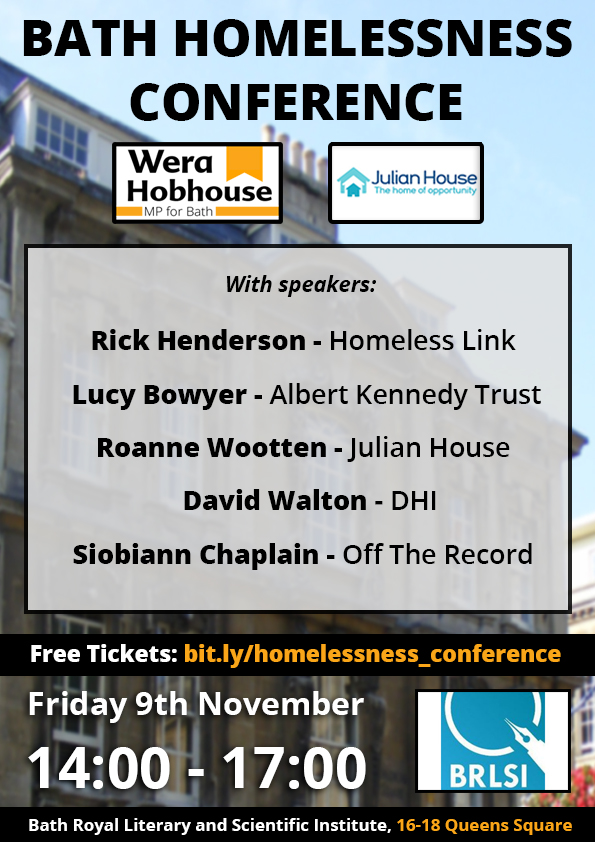