At a public meeting on Thursday evening 17th June, Bath MP Wera Hobhouse stated that Cleveland Bridge is not the right route for north/south HGVs, and confirmed that she invited 3 Wiltshire MPs to inspect the bridge repairs.

At a public meeting on Thursday evening 17th June, Bath MP Wera Hobhouse stated that Cleveland Bridge is not the right route for north/south HGVs, and confirmed that she invited 3 Wiltshire MPs to inspect the bridge repairs.

She said: “Cleveland Bridge cannot sustain being repaired every 15 - 20 years. What we need are long-term, permanent solutions. The bridge is simply not the right route for 40 tonne HGVs.”

“I was pleased that the meeting was well attended by residents as well as Wiltshire councillors and Chippenham MP, Michelle Donelan. We were able to explain that Cleveland Bridge is a Grade II*, listed structure, and the Council has a legal duty to protect it. It was last strengthened in 1997 and engineers signed it off for 18 tonnes. The Council tried to impose an 18 tonne weight limit in 2012, but the Government threatened legal action. Last year I raised this matter in Parliament and I have had several meetings with Government Ministers but, so far, we have not made any real progress.”

Cllr Manda Rigby (Bathwick Ward), Cabinet Member for Transport, said: “The full extent of the damage will be determined once the scaffolding is in place enabling a comprehensive assessment. The bridge was due to be closed on 28th June but one of the contractor’s workforce was diagnosed with Covid, causing the closure to be pushed back potentially.”

Cllr Rigby added: “Some people in our city will see a reduction of traffic in their area; others will see an increase. We will be monitoring this and do what we can to mitigate it. But there will be a certain amount of disruption. There are 17,000 vehicle journeys a day over Cleveland Bridge. While it is undergoing repair, the bridge will remain open to pedestrians, cyclists and emergency services vehicles, but closed to all other traffic.”

Council Leader Cllr Kevin Guy (Bathavon North), debunked comments that B&NES Council was not working with Wiltshire Council. “This is simply not true. Today I had fruitful conversations with the Leader of Wiltshire Council, the Wiltshire Chief Executive and Leader of the Lib Dem opposition in Wiltshire. In my strategic view as Council Group Leader, the biggest challenge is north-south traffic. That is an issue that is shared by ourselves, Wiltshire, South Gloucester, Mendip and everywhere.

“The long-term solution lies in the hands of central Government. I will do everything in my power to move that Government work forward. The Western Gateway Initiative and the North-South Connectivity Review are underway now. I sympathise with the Wiltshire councillors and MPs who don’t want HGVs going through their towns and villages - just as they shouldn’t be going through the centre of Bath. We need to find a joined up solution to the bigger traffic problem.”

Wera Hobhouse said: “Bath is a World Heritage site and the countryside around it is closely connected with it. I am committed to protecting our heritage assets which are a source of local and national pride. Along with my Council colleagues, I am convinced that the bridge is not the right route for heavy north-south traffic. We will have to wait for the outcome of the consultations and studies. I am sure the WECA Mayor has a role to play as well.

“I am very keen to work together with Wiltshire and have invited the three Wiltshire MPs whose constituencies are on the A350 to come and inspect the bridge for themselves. Let’s not use this issue as a political football.”

During the meeting, Wiltshire MP Michelle Donelan said that she had not received the invitation which was sent on 8 June. Wera said that she will resend the letters.

Watch the meeting below: 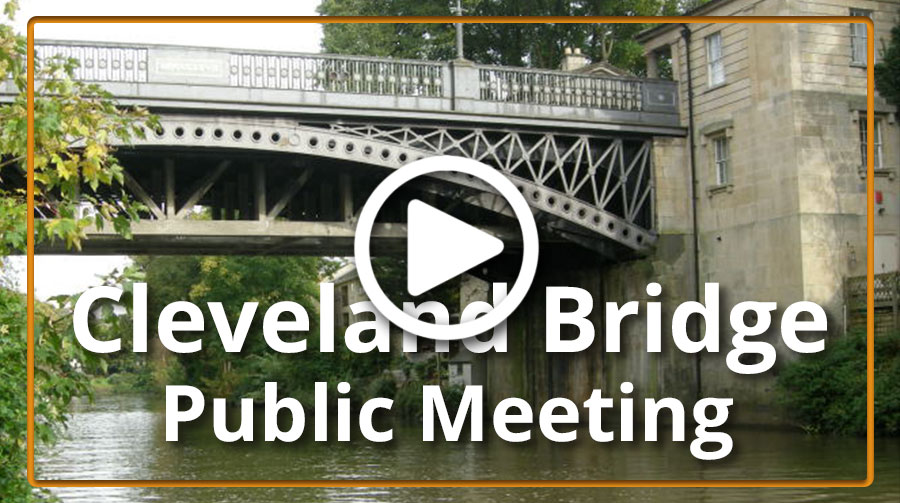